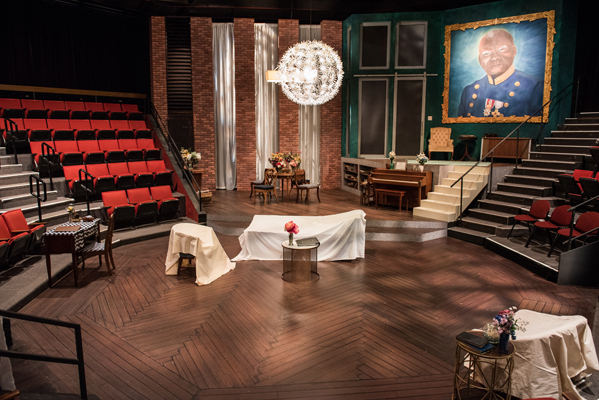 Using Jon Robin Baitz's contemporary adaptation of Hedda Gabler, the director, Corey Atkins, wanted to create a timeless approach to the story. One of the biggest challenges with the environment for the show is that this house is not truly Hedda (Gabler) Tesman's. This is Senator Faulk's villa that Aunt Julia bought and decorated for the young couple while they were on their six-month honeymoon. Corey and I developed a backstory that the villa was, at one time, an industrial building and Aunt Julia is a want-to-be Joanna Gaines interior designer. Much of the design selection process was curating items that reflected periods ranging from 1890s to today as well as researching the design aesthetic of Joanna Gaines. The herringbone floor is an extrapolation of her love of shiplap. Barn door, white curtains and the object d'arte reflect her Fixer Upper style.